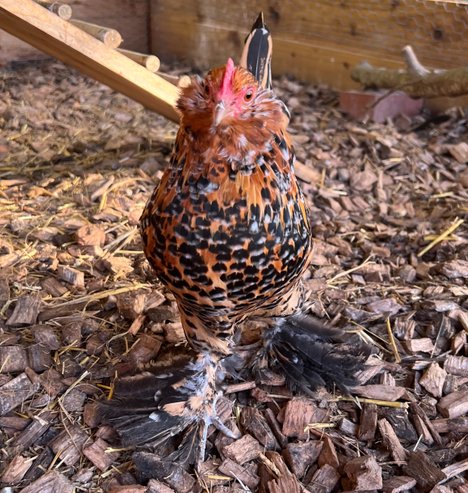 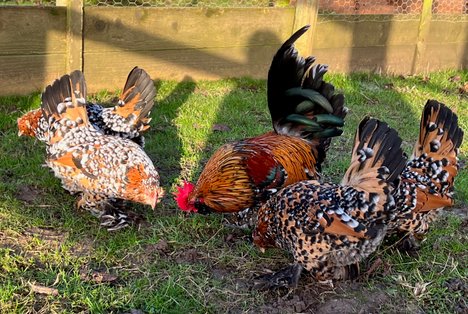 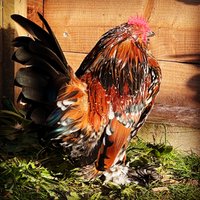 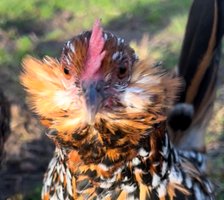 The Barbu D'Uccle is a Belgian breed of bearded bantam chicken. It has a low posture, full beard and a muff, a short but well developed neck, body broad and deep.  The tail is carried almost prependicular to its back and legs are short and feathered.

They are friendly talkative birds and make great family pets.

This is very intricate and attractive colour scheme. Briefly the head is orange-red with white points. The beard is of black feathers laced with very light chamois, each feather ending with a round black spot with a white triangular tip. Neck hackle black with golden shafts, and broadly bordered with orange-red, each feather having a black end tipped with a white point. The extraordinary abundance of neck hackle makes the main colour appear wholly orange-red, the black parts being scarcely visible. Back red shading to orange towards saddle hackle. Wing bows mahogany-red, each feather tipped with white. Wing bars russet-red with lustrous green-black pea-shaped spots at the ends, finishing with silvery-white triangular tips, the whole forming regular bars across the wings. Primaries black with a thin edging of chamois on outside. The visible lower third of each secondary feather chamois, the upper two-thirds black. The remainder of wing a uniform chamois, each feather having at the end a large pea-shaped white spot on a black triangle, the tips spaced evenly to conform with the shape and outline of the wing. (Note the reversal of these pattern-markings from the normal arrangement.) Tail feathers black with a metallic green lustre, having a fine edging or lacing of dark chamois, and terminating with a white triangle. Breast, foot-feathering and the remainder of the plumage throughout of golden chamois ground colour, each feather having a light chamois shaft and finished with a black pea-shaped spot tipped with a white triangle.

Ground colour uniform golden chamois, each feather terminating with a black pea-shaped spot tipped with a white triangle. Tail feathers black, finely laced with chamois and with white tips. Wing markings and other plumage as described for male, allowing for natural sexual differences.